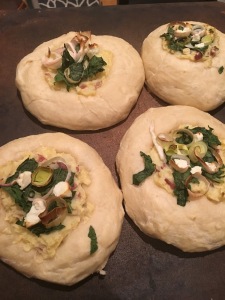 On one of the hottest days so far this summer, I set out to prepare a dish more suitable for below-freezing winters in Siberia. As part of an effort to prepare baked goods from all corners of the globe, I’ve begun randomly selecting coordinates on Google Maps and preparing a bread or dessert recipe from that region. The first location that happened to come up was Siberia, where the average July temperature is only 63 degrees F. I know little about Russian breads and desserts, beyond well-known staples like black bread, so I was excited to learn more.

I googled Siberian baked goods, and shangi,  a mini potato pie described on several websites as the Russian equivalent of pizza, caught my attention. A blog on Russian cooking describes these rich pies, often topped with mashed potatoes but sometimes fish, cheese, or even buckwheat porridge, as nourishment for “the ancient people who lived on Russian soil in pre-Slavic times. Unlike pirozhki or pelmeni, shangi are less known even in Russia, being mostly a regional dish in northern Russia and the Urals.”   (Pirozhki and pelmeni are buns filled with meat or vegetables and boiled meat-filled dumplings, respectively.)

What I’ve created here is an extremely loose interpretation of shangi. I really should have followed the recipe exactly the first time around. But as often happens when I cook,  a strange combination of laziness and inventiveness prevailed. The recipe I used calls for topping the shangi with a mixture of potatoes, vegetable oil, and sour cream.

After deciding to substitute Greek yog

urt (which I already had in my fridge) for the sour cream (which I didn’t), I felt the urge to take additional creative liberties, and all efforts to prepare authentic shangi went out the window. I figured leeks and spinach would go well with the potatoes, and add a green, summery touch to an otherwise wintry dish, so I sliced and chopped some up and sprinkled them on top.

The recipe was vague when it came to the pie crust, calling only for the use of “yeast dough” – it was only later that I found the Russian food blog, with its recipe for traditional rich, buttery shangi dough – so I prepared my favorite pizza dough recipe.

After shaping the dough into several small disks, I brushed each round with olive oil to ensure a crisp crust, as I always do when preparing pizza. Per the recipe’s instructions, I created a well in the center of each disk and spooned on generous heaps of potato filling, followed by my entirely unauthentic toppings.

So here you have it, for better or worse, my summery spin on a dish that has sustained generations of northern Russians through harsh winters (the average January temperature is -25 degrees!) and summers not nearly as warm as those in New York.