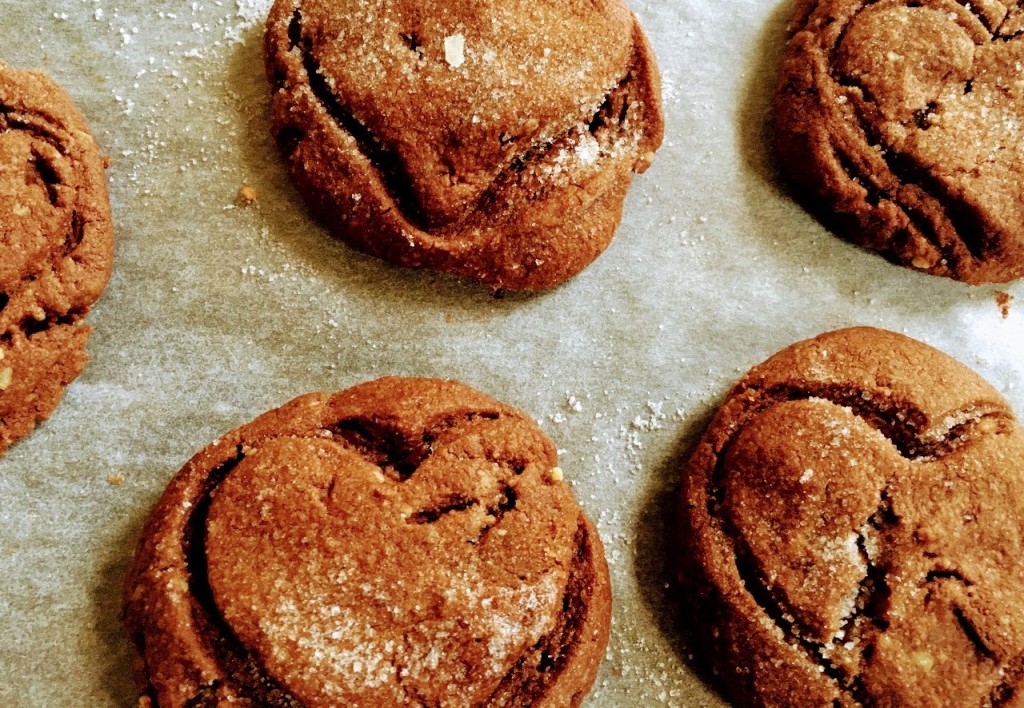 This is another excellent recipe from the blog Sweet Little Joys. These shortbread cookies are flavored with cinnamon and a hint of cayenne pepper, just like the beverage they’re named after.

A Google search on the history of Mexican hot chocolate led me to a fascinating Chicago Tribune article, dating back to 1942, that describes how hot cocoa was prepared in ancient times: Aztecs mixed melted cacao with honey, herbs, spices, and corn kernels, and served the drink with breakfast or dinner.

Before the advent of cane sugar as a sweetener, chocolate was primarily a savory item. The article goes on to describe the lore behind cacao. Aztecs considered it a food of the gods, gifted to humans by the deity Quetzalcoatl, and Mayans celebrated the crop in an annual harvest festival. Cacao was considered so valuable, it was even used as a  form of currency:

“In early times there existed in Mexico a complete monetary system based on cacao, which was accepted as currency in business and commercial transactions. Even as late as the 19th century, cacao beans served as currency in small markets throughout the republic of Mexico.”

If only we could bring back a chocolate-based monetary system and use these delicious cookies as currency!

Recipe adapted from Sweet Little Joys. A quick note on my adaptations: I didn’t have almond flour, so I used finely ground, toasted pecans instead. I chose pecans because they happen to be native to Mexico, and are one of the few nut species to originate in North America, but hazelnuts would probably be a great substitute as well. I also replaced the chocolate chips with dark chocolate chunks, and the almond extract with vanilla.

Line a baking tray with parchment paper, and preheat oven to 350 degrees F. Toast pecans for a few minutes, until fragrant, and pulse in a food processor until finely ground, stopping just before the pecans become the consistency of peanut butter. In a small bowl, combine pecans with all-purpose flour, and set aside.

In a large bowl, combine butter and vanilla. Stir in sugar, cocoa powder, salt, cayenne, and cinnamon for about a minute, until smooth.  Chop chocolate bar into chunks using a serrated knife. Stir in flour mixture until just combined, and then add chocolate chunks.

If the dough is dry and crumbly at this point, knead it in the bowl a few times  until it comes together. (I find that the softer the butter is when I start, the less likely the dough will be crumbly.) Refrigerate dough until it’s firm enough to work with (the original recipe suggests at least an hour but I got away with waiting 20 minutes.)

Scoop heaping tablespoons of dough and roll them into balls. I tried two different methods for shaping the cookies, and both worked very well:

Method 1 – from the original recipe: Flatten the balls of dough between your palms and place them around 1 inch apart on the baking tray. Press a greased cookie stamp or small cookie cutter shapes (i.e. hearts or stars) into the dough, and sprinkle granulated sugar on top of each cookie, particularly in the crevices of the cookie cutter shape.

Method 2: Roll out the dough on a lightly floured surface until it’s about 1/4 inch thick. Shape with the cookie cutters (I made a combination of heart-shaped cookies and round cookies with a heart shape gently pressed in the middle) and place on baking tray as instructed above.

The recipes produces a lot of dough, so you’ll need to bake these in two batches, or freeze the extra dough.

Bake for 10-12 minutes, until cookie edges are firm. Let cool on the baking tray for a few minutes before transferring to a cooling rack. Store in an airtight container at room temperature for a few days.