Whenever a pizza craving strikes, I tend to bake it from scratch at home. The other day, I made a rare exception, and visited Brooklyn with friends to sample some of the borough’s best pizzas. My two favorites – a thin-crust slice from Best Pizza topped with ricotta and caramelized onions (and baked in a century-old wood burning oven,) and a Detroit-style pie with a thick, focaccia-like crust from Emmy Squared – inspired me to create this twist on a traditional Italian bread. The combination of sweet red onions, ricotta seasoned with dried herbs, a generous sprinkling of black pepper, and a crust that is at once airy, oily, and crunchy, is out of this world. 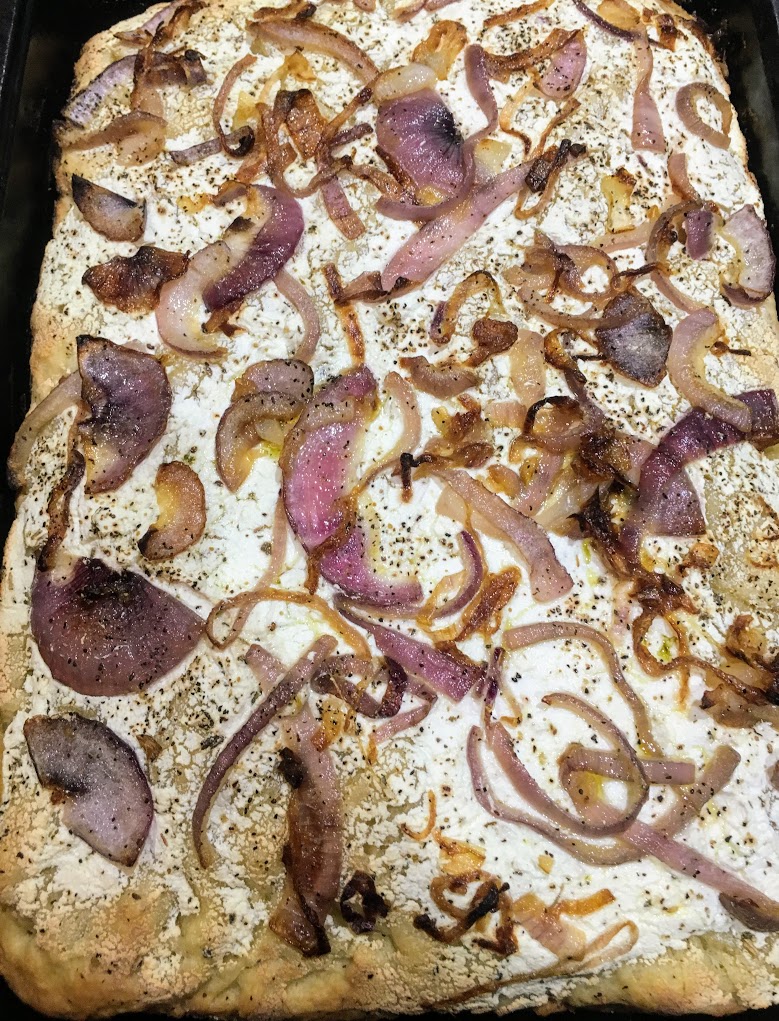 Focaccia with Ricotta and Caramelized Onions

Pour water into a large mixing bowl. Add yeast and sugar, stirring gently until dissolved. Set aside until mixture is bubbly and foamy, around 5-10 minutes. Stir in 1/2 cup of olive oil, flour, and salt, until a soft dough comes together. Turn onto a floured surface and knead a few times. Return dough to bowl, cover with a towel or plastic wrap, and set aside to rise until doubled in size, around 45 minutes.

Meanwhile, pour remaining 1/2 cup of olive oil into a 10 x 14 inch pan and set aside. When dough has risen, transfer to pan. Turn dough over so both sides are coated with olive oil. Stretch dough so it covers the bottom of the entire pan. Make indentations in the dough with your fingers, making sure to press all the way to the bottom of the pan. This forms focaccia’s classically uneven, bumpy crust. Cover with plastic wrap or a towel and let rise a second time, around 30 minutes, until around doubled in size.

While dough is rising, prepare the toppings. Cut onion in half and slice into thin rings. Heat oil in a frying pan over medium heat, and add onions. Lower to medium-low heat and saute, stirring occasionally, until brown, translucent, and fragrant, around 20 minutes. Remove from heat and set aside. In a small mixing bowl, combine ricotta and dried herbs (I used a mixture of all 6 herbs, but feel free to use any combination you like.)

Preheat oven to 425 degrees F.  When dough has finished rising, sprinkle surface with sea salt. Spread evenly with ricotta mixture, and press fingers into the dough to re-form indentations. Top evenly with caramelized onions. Sprinkle liberally with ground black pepper. Bake for around 25-30 minutes, until edges of crust are golden brown. Let cool in pan before cutting into pieces. Refrigerate leftovers.