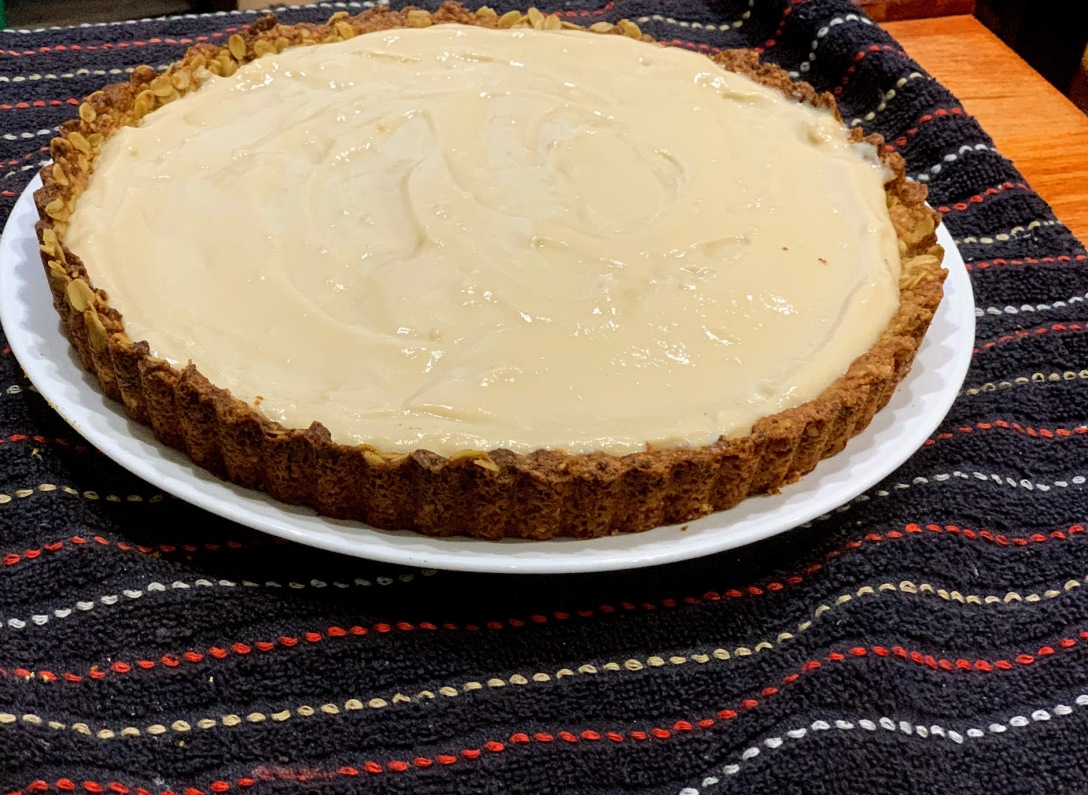 In Undertale, a retro video game popular with the kids in my after school cooking class, butterscotch pie has the power to heal the protagonist, a small child lost in an underground world filled with monsters. After coming across the pie in the video game, several students asked if I could teach them how to make it. For the sake of time and simplicity, I helped the kids prepare a classic butterscotch pudding recipe from the blog Smitten Kitchen.

I figured the pudding would make an excellent pie filling, so I went home and experimented with a crust that would complement the warmth of butterscotch, a confection with origins in Victorian-era England; Queen Victoria herself was a big fan of the dessert. (Side note:  “scotch” refers to “scorching,” or cooking, brown sugar and butter together, not the alcoholic drink.) I settled on a crust made of tangy apricots, almonds, oats, and cinnamon. With no added sugar, the crust (which also happens to be gluten-free) balances out the sweetness of the pudding.

Prepare the filling: Melt butter in a saucepan over medium-low heat. Add brown sugar and cook for a few minutes until sugar melts and mixture bubbles up, making sure to stir frequently to prevent the sugar from burning.

Stir in cornstarch and salt until thoroughly combined. Switching from a spoon to a whisk, pour in the milk with one hand and whisk it with the other to prevent lumps from forming. Cook until mixture begins to simmer, stirring frequently (if you can, try stirring nonstop.)

Once mixture starts to thicken and bubble around the edges, cook for a minute, stirring continuously, as the pudding thickens further; it will thicken even more as it cools. Remove from heat and stir in vanilla, if using. Pour into a shallow container or dish (I used a glass pie pan,) cover with plastic wrap, and place in fridge until ready to use.

Prepare the crust: Preheat oven to 375 degrees F. Place dried apricots in the bowl of a small food processor, and process until coarsely chopped. 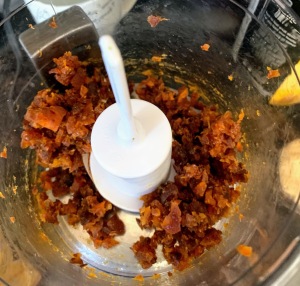 Add almond flour, oats, salt, and cinnamon and process until well combined. Add butter, processing until a paste-like mixture forms. Press into the base and sides of a 9-inch tart pan. If the crust is so soft that the butter seems to be melting, place tart pan in freezer for 10-15 minutes. Bake for 15 minutes, or until golden brown around the edges. Set aside to cool.

Assemble: Pour butterscotch filling into crust and smooth with a spoon or rubber spatula. Refrigerate before serving to allow filling to continue to thicken and set. Wrap leftovers in tinfoil or transfer to airtight container, and store in the refrigerator.